The Scottish Culinary team trip to Luxembourg kicked off as we met up at Edinburgh Airport on the 21st of November 2018. 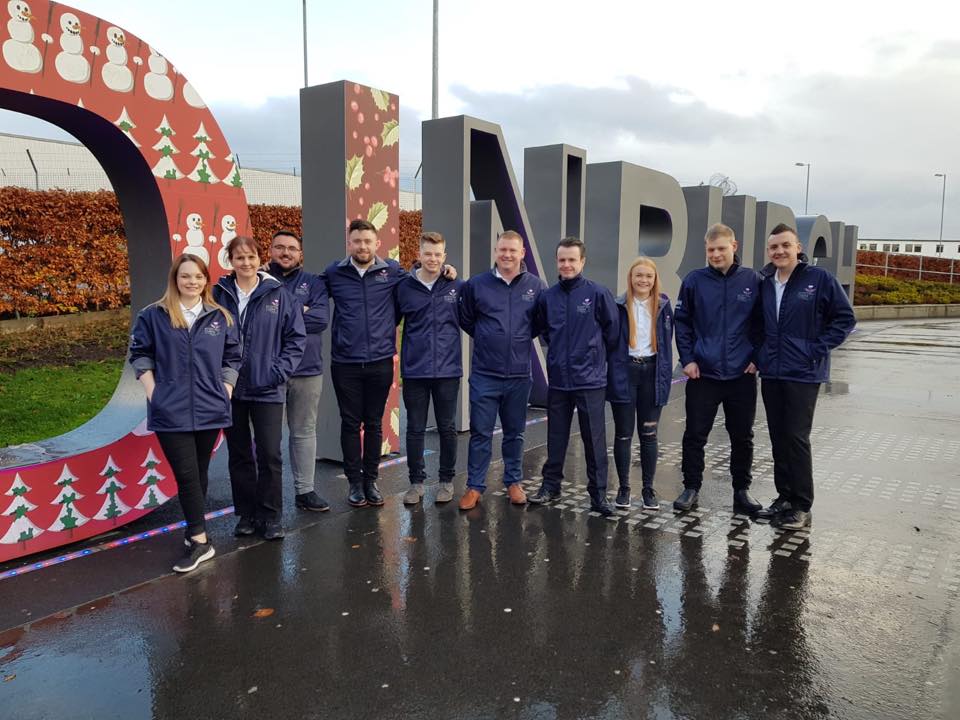 With the van transporting all our equipment, ingredients and showpiece parts, we could do nothing else other than sit back and relax!

Reunited with our catering things in Luxembourg on the 22nd, we settled in to the hotel and then the kitchens.

After a visit to the market to buy some of the fresher ingredients, the team of 10 of us got stuck in to preparing everything we needed for the competition (there are strict rules about what can be cleaned, semi prepared, picked, washed, peeled etc before arriving at the competition exhibition centre).

The menu for hot kitchen was:

I focused on working with the pastry chef to run through the chocolate decoration for the dessert, plus various pieces for the showpiece.

While the rest of the team attended the opening ceremony on the 23rd, I was pleased to have peace and quiet and a cooler kitchen to start the flowers for the showpiece! The fresh shell fish also arrived at this time.......having been driven from 9am one day until 4pm the next all the way from Loch Fyne!

After working on the showpiece from 3pm then right through the night until 4.30am on the show day, I was glad to get it loaded up for its final trip to the Luxexpo centre at 5am. Battling with pitch darkness and pouring rain, it was a bit of a challenge!

With the expert help of team members Bethea and Erin, I assembled the showpiece by 8am, when the judging started. Cue a well needed trip to get coffee and pastries!

After a rest, we returned to the exhibition centre to help the hot kitchen team polish plates for their 110 meals and we then had the opportunity to have a look around at all the incredible exhibits from around the world.

The hot kitchen team had their mise en place checked by the judges (this is to check they haven't pre-prepared anything they shouldn't have, that everything is stored hygienically, and that the HACCP temperature control records are in order). Full marks awarded!

At 1pm, all the teams of that day went to work under continual scrutiny from the judges. When the meals originally went on sale a few weeks before the event (anyone attending could book in to a particular country's meal), all 3000 tickets from all the teams sold out within 5 hours!

As you can see from the draw, there were many teams entered, not to mention community and regional teams too! 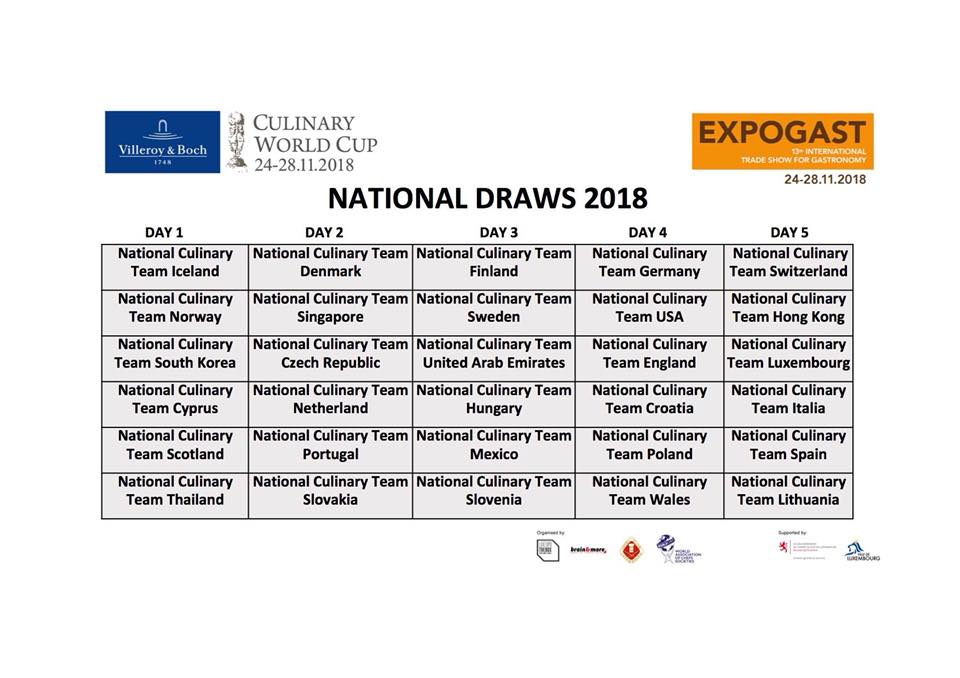 At 6pm, I was summoned to the prize giving and was over the moon to receive a bronze medal for my Chocolate Showpiece! To receive a medal at such a high profile international event was an amazing experience! 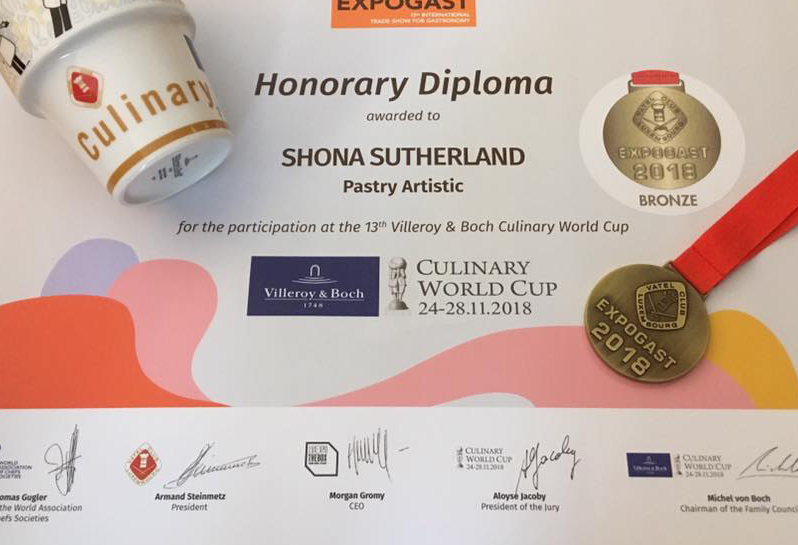 Team mates Bethea, Erin and I were lucky enough to be booked in for the delicious Scottish competition meal, which was washed down with some celebratory wine! It was then time to clear out the competition kitchen and load up the van again!

Thankfully the next day after the final sort out of the van contents, we had time to visit the exhibition again under less pressure. We found out that that the Scottish hot kitchen team had won a silver medal, and overall, were 11th in the World of 30 teams! When competing against teams which have full time competition chefs, Scotland can really stand proud with their achievements! 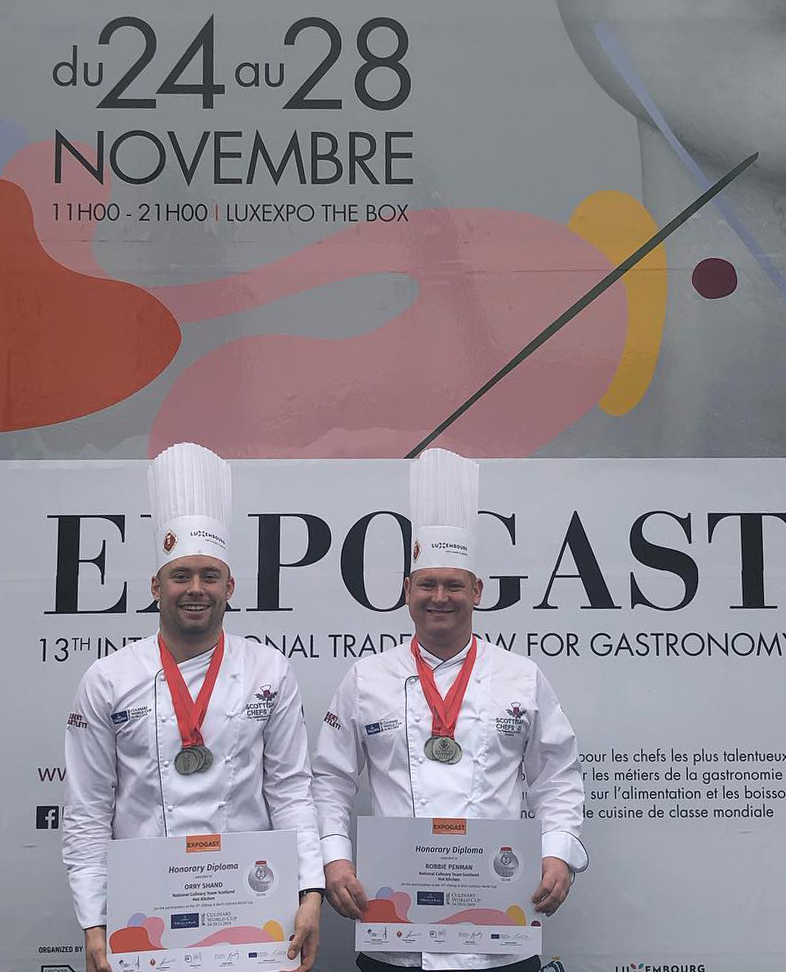 So overall it was an incredible trip, and I can't wait to prepare for the 2020 Culinary Olympics in Stuttgart next! Team members for the World Cup were:

View cart
Back to top